Yao (Sara) Han has been granted “the 2016 Chinese Government Award for Outstanding Self-financed Students Abroad” by China Scholarship Council. Ambassador Xiaoyong Yue attended the ceremony, presented the award, delivered a keynote speech, and had a talk with the awardees. The awards ceremony was held at the Chinese Embassy in Dublin on 24 February 2017 facilitated by First Secretary Xiaochuang Wu. 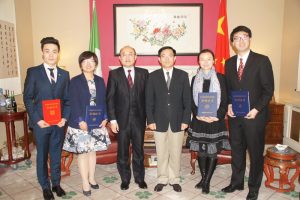 This award, starting in 2003, was founded by the Chinese government with the purpose of rewarding the academic excellence of self-financed Chinese students studying overseas. Only those with outstanding performance in their PhD studies will be considered by the award selection panel. Only 501 young talents were granted the 2016 award all over the world.

China Scholarship Council and the Chinese Embassy also expressed their sincere gratitude to all those contributing to her remarkable achievements.